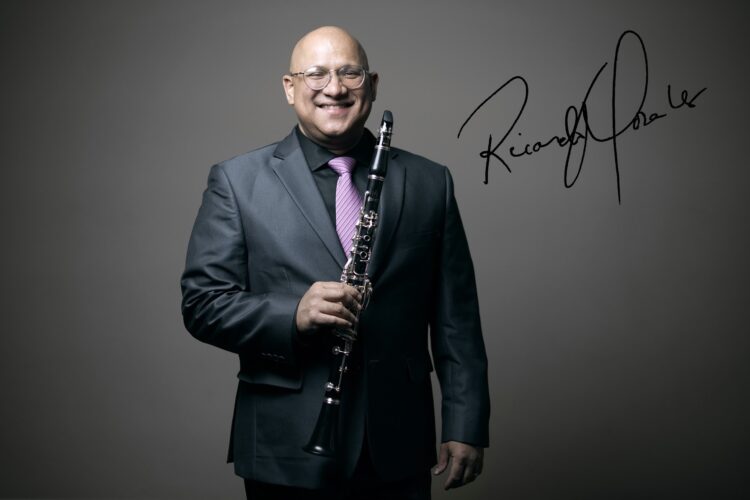 PIMFAdminDecember 02, 2020In The NewsComments are off for this post

“There’s a glossy perfection to everything that Ricardo Morales does. If you didn’t know better, you might think this is simply the way it is with clarinetists. It’s not.” – Peter Dobrin, Philadelphia Inquirer

There are plenty of musicians who are more famous and marketed more widely than Ricardo Morales, Principal Clarinet of The Philadelphia Orchestra.

There are few who are as well-respected and more revered for their artistry and skill than Ricardo Morales.

“He was perfect. He achieved that blend of classical and jazz that I think Gershwin wants. You simply can’t play that opening better. Ricardo Morales is a wonder of the musical world today.” (From merciless New Criterion music critic Jay Nordlinger’s review of Rhapsody in Blue at Carnegie Hall.)

And flat-out dazzling in the spotlight:

“He is above all a refined player, even if all of the jumps, trills, and runs of the work were practically begging to trip him up.

“Weber was the great innovator of his day, asking instrumentalists for a tall order of technical firepower. Morales didn’t miss the allusion to vocal drama, of course: He played one passage so softly it was a death scene in miniature. The third movement, based in dance, was pure adrenaline, with great speed and distance covered by a clarinetist who never seemed to break a sweat.” (From a Philadelphia Inquirer review of Weber’s Clarinet Concerto No. 2 in E Flat Major.)

Born to a musically-minded family in Puerto Rico, Mr. Morales’ earliest memories include participating with his family in the annual parrandas, the Christmas tradition of music, dance and food during the holidays. (The family musical prowess continues today; the Morales’ streamed PIMF faculty recitals during the pandemic via Zoom!)

He and all five of his siblings have pursued careers in music, training at the Escuela Libre de Música in San Juan, where an 11-year-old Ricardo fell in love with the clarinet. A decade later, after continuing his music studies on the mainland, he was named Principal Clarinet of The Metropolitan Opera Orchestra. Yes, at age 21.

Today Mr. Morales is not only Principal Clarinet with the Fabulous Philadelphians, he holds the position with the Saito Kinen Festival Orchestra and the Mito Chamber Orchestra, at the invitation of Maestro Seiji Ozawa. A featured soloist all over the world, he shares his expertise as a Performing Artist for F. Arthur Uebel clarinets and as a teacher and consultant to aspiring clarinetists all over the world.

Mr. Morales still inspires awe in the aforementioned critic Jay Nordlinger, who can’t resist adding a rave about Maestro Ricardo even when reviewing someone else:

“In the Met Orchestra, McGill succeeded Ricardo Morales, who is now principal clarinet in the Philadelphia Orchestra. Morales was a star player of the Met Orchestra, and James Levine featured him a lot—every chance he could, really—in the Met chamber series over which he presides. I have marveled at Morales in these pages many times. And I will tell you something interesting: I know a professional clarinetist, about fifty, who has a great reverence for the past: for the line of clarinetists from the very beginning. And he believes that Morales is the best clarinetist … ever. I would not contradict that.”

Nor would we! PIMF is unendingly delighted to count the incomparable Ricardo Morales among our stellar faculty, and so pleased to offer his Clarinet Intensive Program during the upcoming winter break.

Would you like to learn first-hand what makes a clarinet genius tick? Spend the week of January 4-8, 2021 in intense training, including private lessons, master classes, and daily Q&A sessions in an intimate studio setting with the master.