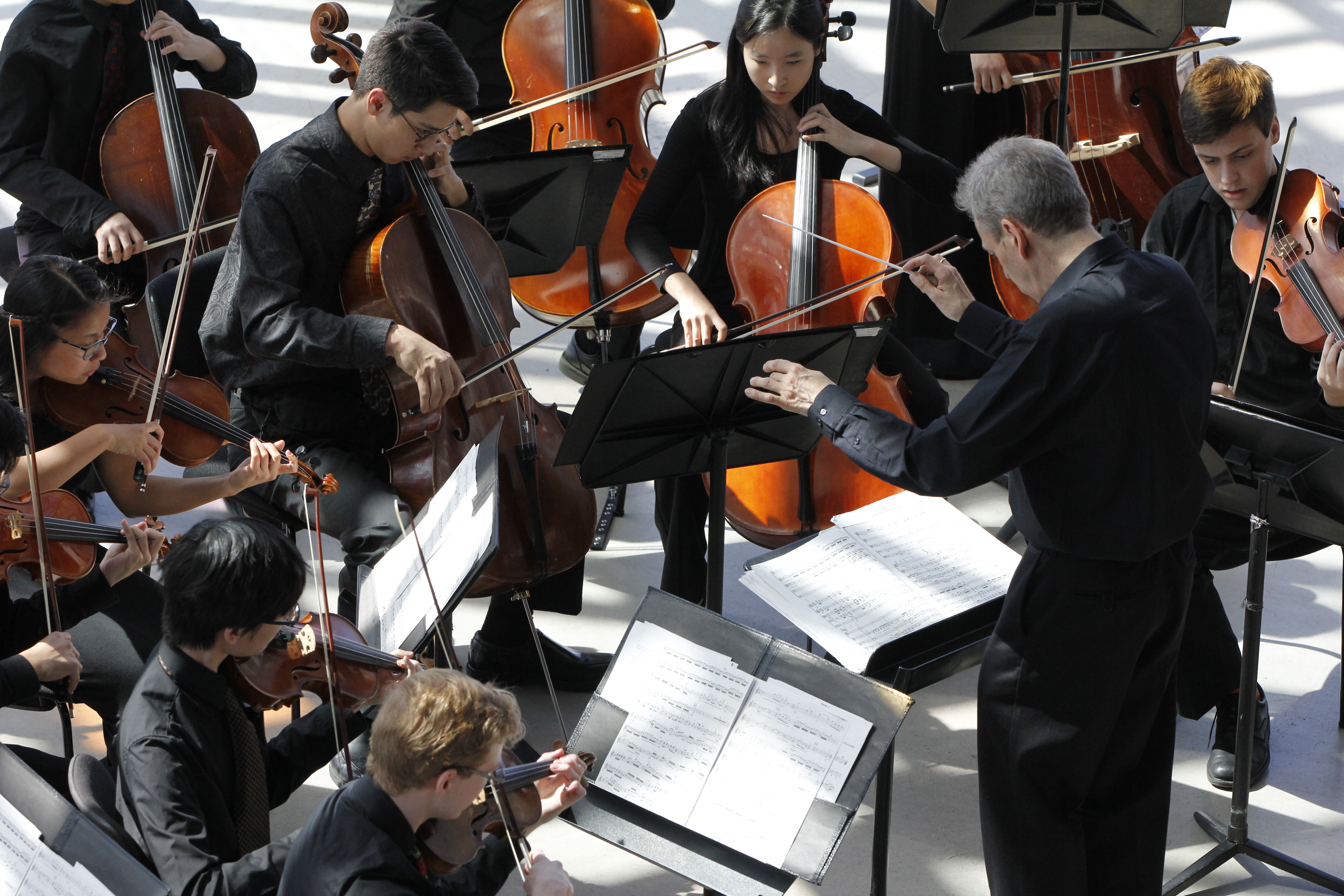 Better known throughout the tri-state area of PA, NJ and DE as simply “Temple Music Prep,” its official title is actually Temple University Music Preparatory Division of the Boyer College of Music and Dance. Serving the Philadelphia community as the non-credit continuing education division of the Boyer College and its parent institution Temple University, Music Prep provides a broad spectrum of music and dance offerings. These range from individual music lessons for all ages and ability levels, to group enrichment opportunities for children as young as newborns and includes all ages in between through adulthood. Also under its aegis are two centers: the Community Music Scholars Program which provides a comprehensive program of jazz and classical music instruction for school-aged Philadelphia children of limited financial means; and the Center for Gifted Young Musicians, designed specifically for the training of young string and harp players who demonstrate great potential for musical achievement by performing at an advanced level.

An important component of Temple Music Prep is its Center for Gifted Young Musicians (CGYM).  Designed to promote excellence in chamber music, the CGYM accepts the area’s most talented 7 through 17-year-old string and harp musicians based on annual auditions held in late spring and early September. The Center’s mission is to provide comprehensive, challenging instruction, as well as performance opportunities for young people who demonstrate strong potential for musical achievement.  Inspired by a merger of The New School of Music with the then Esther Boyer College of Music at Temple, the CGYM was established in 1986 with 25 string players in the Youth Chamber Orchestra (YCO) under the direction of Maestro Luis Biava, who was the conductor-in-residence of the Philadelphia Orchestra. YCO’s first public performance featured its 5-year old violin soloist, Sarah Chang.

Today the Center for Gifted Young Musicians has developed to embrace the training of gifted young instrumentalists in a program that now includes 3 chamber orchestras, 15 small chamber ensembles, and a large harp ensemble, all coached or led by members of The Philadelphia Orchestra and leading Philadelphia professionals. During the course of its 30 years history, the center also had included a children’s choir and brass ensemble. This year CGYM members come from 56 different school districts with 76 percent of the members from PA, a little over 21 percent from NJ and almost 3 percent from DE with almost half of all of the students drawn from the Philadelphia suburbs.  The Center showcases all of these talented students each year in a winter concert series and in the spring through the “Festival of Young Musicians,” a multiple-concert series.

Since 1985, 469 Temple Music Prep young instrumentalists and vocalists have won or received recognition in 90 different competitions. During the past 30 years, 24 YCO members have performed as soloist with The Philadelphia Orchestra.  Three YCO alumni currently are members of The Philadelphia Orchestra, and a number of former students are members of various orchestras and chamber ensembles throughout the nation including Cleveland Orchestra, Toronto Symphony Orchestra, Louisville Orchestra, Kansas City Symphony, National Symphony Orchestra and the Metropolitan Opera Orchestra, Amernet String Quartet, Serafom String Quartet, Time for Three, Biava String Quartet, Koryo String Quartet, Dover Quartet among others. In addition to the full Youth Chamber Orchestra, 16 students were featured as soloists or in chamber ensembles on NPR’s nationally broadcast program From the Top.  Three YCO students and four alumni were winners or semi-finalists in the coveted Sphinx Competition, and four students have been awarded prizes from the National Foundation for Advancement in the Arts, now YoungArts, one of them being the world-renowned opera bass baritone, Eric Owens.  Several young musicians won recognition in international competitions, including the Yehudi Menuhin Competition in France, the Louis Spohr Competition in Germany, the Stulberg International Competition, and the Romanian “Remembering Enescu” Competition.

Over the years various performing ensembles of the Center for Gifted Young Musicians have performed at the Colombian Embassy, the HarrisburgWhitaker Center, in Puerto Rico at the Museo de Arte de Ponce and Puerto Rico Conservatory of Music, at the ACDC International Conference, the Oregon Bach Festival and the Pacific International Children’s Choir Festival, the American Harp Society National Conference NYC, the International Festival de Harpe in Ancenis (France), the Mid-Atlantic Harp Festival in McLean, VA, the Festival de la Harpe, in Princeton, NJ,  the Harpa International String Festival in Reykjavik (Iceland) and with the Philadelphia Orchestra, the Philly Pops, and Orchestra 2001 among others.

This past summer YCO enjoyed a successful 10-day tour in Reykjavik as part of an ongoing relationship with the Tonskoli Sigursveins. The orchestra performed at Harpa, Iceland’s national performance center, and in small ensembles played chamber music at the Icelandic National Museum. Orchestra members also gave a shared concert with Icelandic friends from the Tonskoli Sigursveins Strings. The highlight of the tour was a private performance for the President of Iceland, Pres. Guðni Th. Jóhannesson, at Bessastaðir, the President‘s Mansion ending the day with a reception where the president graciously posed for selfies with the young musicians. The tour concluded with a unified “Festival Concert” celebrating Icelandic Independence Day which took place at Harpa.

Housed within the Boyer College of Music and Dance and part of Temple University’s Center for the Performing and Cinematic Arts, Temple Music Prep is a proud member of the following professional organizations: The National Guild of Community Arts Education,  Greater Philadelphia Cultural Alliance, and the National String Project Consortium.

A Collage of Temple Prep’s Performance at Harpa: