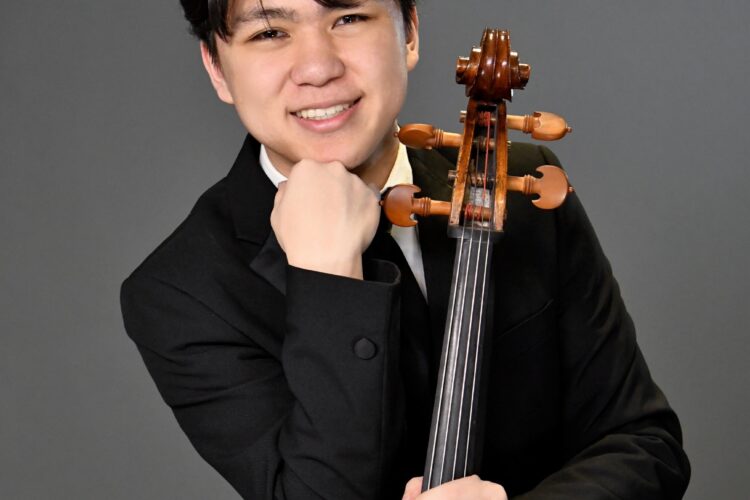 PIMFAdminFebruary 22, 2021In The NewsComments are off for this post

Heechan Ku is keyed up to finally play for an audience again, even a virtual one. The cellist has been selected to perform for Philadelphia Orchestra Assistant Conductor Erina Yashima in PIMF’s all-instruments online Master Class on February 27th.

“Given that this is my first time playing in front of an audience ever since the COVID outbreak,” he tells us, “I am practicing and preparing myself mentally more than ever for this master class. Though I am nervous, I am more excited and eager to perform again and connect with people through music. Stepping onto this digital stage will be refreshing, to say the least.”

The 18-year-old from Tenafly, New Jersey is a freshman at the New England Conservatory, where he says studying virtually has been going well: “I love my teacher, Lluis Claret. He tries his best to overcome the barrier of online teaching with his students and that has been great for me.”

But like so many music students right now, Heechan – who also goes by “Alex” – looks forward to performing with colleagues and friends in person once more, as he did for most of his teen years in Julliard’s Pre-College Division at Carnegie Hall and on the stages of Lincoln Center for the Performing Arts in New York City. He’s won prizes in national and international cello competitions such as NJIO Concerto Competition, and was invited to compete at the 10th Tchaikovsky Competition for Young Musicians. You’ll also find him among the recipients of the 2020 YoungArts Awards for Classical Music, along with PIMF alum and Master Class veteran Jack Naglick.

Heechan was introduced to music early on at home but found his way to the cello – quite literally—by the seat of his pants!

“My mother is a piano teacher and taught me the piano since I was young and also made me play the violin,” he recalls. “I loved both, but I absolutely despised practicing the violin because my mother would force me to stand up when I was practicing. When I found out I could sit down when practicing on the cello, I immediately asked my mom to change

instruments. The comfort of sitting on a chair while playing music was amazing for me as a child.

“What got me really hooked,” he continues, “is when I heard the Brahms cello sonata in E minor. After hearing this, I was practicing every day waiting for the day until I got to play that piece.”

While the Brahms is a “dream piece” to perform for Heechan, for the PIMF Master Class with Erina Yashima, he’ll play Antonín Dvořák’s Cello Concerto in B Minor, Op. 104, “Allegro,” a newer favorite.

“I absolutely love the interaction between the characters and the emotional depth that Dvořák integrates in this piece. Playing the last composed concerto by Dvorak allows me to vicariously experience the wide array of emotions that Dvořák felt during his life and put into this piece.”

Short term goals include getting more comfortable with playing in front of people again after a year-plus live performance drought. Long term goals include developing a distinctive cello voice, “that people will really know it is me when I am playing, (also) finding more joy when I am practicing rather than getting frustrated.

“My teacher Lluis Claret would tell me, ‘The result is not urgent. The search is what makes it interesting.’”

No searching required to learn more about PIMF virtual Master Classes and how to watch Heechan this month. Just click here.