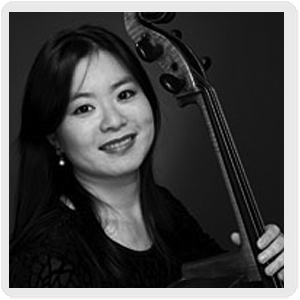 An exceptional musician renowned for her fluid technique, gorgeous tone and brilliant, expressive performances, cellist Hai-Ye Ni enjoys a distinguished, multi-faceted career as principal cellist of the acclaimed Philadelphia Orchestra, and as a sought-after soloist and chamber musician. Ms. Ni has performed on classical stages around the world, appearing as soloist with such symphony orchestras as Chicago, New York Philharmonic, San Francisco, the Orchestre National de Paris. Her recital credits include the Kennedy Center for the Performing Arts, the Smithsonian Institute, and the Wallace Collection in London.

She has collaborated with some of today’s foremost artists, including pianist Yefim Bronfman and violinists Joshua Bell, Cho-Liang Lin, and Pinchas Zukerman, and festivals such as Ravinia, Aspen, and Pablo Casals. Highlights for the 2010-2011 season included The Philadelphia Orchestra performance featuring Ms. Ni as soloist in composer Tan Dun’s The Map, Concerto for Cello, Video and Orchestra, the Tchaikovsky’s Variations on a Rococo Theme with the Philadelphia Chamber Orchestra and a solo recital with pianist, Cecil Licad, for the Philadelphia Chamber Music Society. She also performed with the Limburg Symphony in Netherland, the Brahms Double Concerto and the Elgar concerto with the Shanghai Symphony.

Ms. Ni also performed in chamber music with Gil Shaham at the La Jolla SummerFest, and Mahler’s Das Lied von der Erde for chamber orchestra at the Bravo Festival in Vail. In October 2009, Ms. Ni performed with pianist Lang Lang on the Carnegie Hall series, “Ancient Paths, Modern Voices: A Festival Celebrating Chinese Culture”. Ms. Ni made her solo debut with The Philadelphia Orchestra in January 2010, in Saint-Saens’ Cello Concerto in A Minor.

Ms. Ni first came to national attention in 1990 when she won first prize at the Naumburg International Cello Competition, and made her New York debut in 1991. She became Principal cellist of The Philadelphia Orchestra in 2006. She has a Masters degree from the Juilliard school.