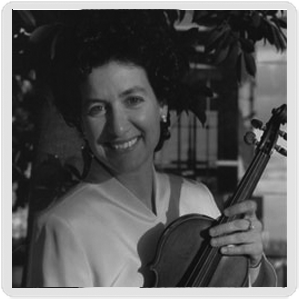 Barbara Govatos holds the Wilson H. and Barbara B. Taylor Chair of the first violin section of The Philadelphia Orchestra and was named the winner of the Orchestra’s 2012 C. Hartman Kuhn Award for enhancing the standards and the reputation of the Fabulous Philadelphians. She and pianist Marcantonio Barone were presented with the Samuel Sanders Collaborative Artists award by the Classical Recording Foundation in recognition of their recording of the complete Beethoven sonatas for violin and piano on Bridge Records.

Ms. Govatos has collaborated with Emanuel Ax, Radu Lupu, Riccardo Muti, Christopher Parkening, Wolfgang Sawallisch, and the Emerson String Quartet. She made her debut in Alice Tully Hall with the Juilliard Orchestra and has made appearances with the Dallas and Delaware symphonies and the Chamber Orchestra of Philadelphia. In addition to performing worldwide with The Philadelphia Orchestra since 1982, she has been heard at the Marlboro, Salzburg, Saratoga, Maggio Musicale Fiorentino, Marblehead, and Music at Gretna festivals, and she has given recitals, chamber music concerts, and master classes at UCLA, Mt. Holyoke College, the University of Delaware, Bucknell University, Westminster Choir College of Rider University, and Weill Recital Hall.

She has been music director of the Delaware Chamber Music Festival since
1990 (www.dcmf.org), is a member of the Italian Baroque ensemble Amerita, delves into her interest in music of women composers with the Hildegard Chamber Players, and is a frequent guest artist with the Lenape Chamber Ensemble and on The Philadelphia Orchestra’s Chamber Music Series.

Ms. Govatos earned Bachelor and Master of Music degrees from the Juilliard School as a scholarship student of Ivan Galamian. During that time she won the Dallas Symphony’s G.B. Dealey International Competition, the Charles Petschek Scholarship, and the Austrian American Society’s scholarship for study at the Mozarteum in Salzburg. Her initial studies were with Sabina K. Girvan and Jascha Brodsky, the first violinist of the Curtis String Quartet, and she was mentored by chamber music greats Felix Galimir, Josef Gingold, Robert Mann, and Mischa Schneider.

Ms. Govatos serves on the advisory boards of Astral Artists, an organization that promotes, presents, and advises talented artists on the cusp of their musical careers, and the Music School of Delaware, a community music school where she began her studies. She also teaches privately in Philadelphia.