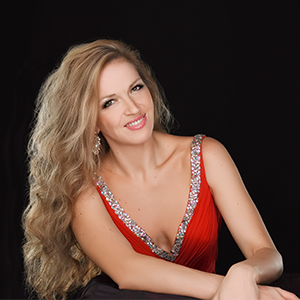 Since 2011 Svetlana has been directing the Piano Studies Program at the Philadelphia International Music Festival. In 2014 Svetlana was appointed as Artist in Residence in Temple University’s Boyer College of Music & Dance, in the Department of Instrumental Studies.

In 2014 Svetlana won “Live on Stage” live showcases and was chosen as their only Classical Pianist Artist for 2015-16 season. This upcoming tour brings her to more than 20 states. Svetlana recently was featured and gave an interview for Keyboard Magazine. Other collaborations include a series of concerts with Robert Davi and Dave Konig at Eisenhower Park, Harry Chapin Lakeside Theater presented by Nassau County Executive Ed Mangano.

In 2014-15 Vadim Repin gave a series of concerts/presentation with Svetlana at the residences of Ambassador of Russia in Washington D.C. and in London UK for Maestro Repin’s Trans-Siberian Art Festival. Their recent recital in March 2015 in Koerner Hall in Toronto, Canada received an astonishing critical acclaim. In July 2015 they performed a recital as part of “2015 – Russian Year in Monaco” in the Salle Garnier, Monte-Carlo Opera. This “Summer Dream” Gala evening was organized in aid of the Prince Albert II of Monaco Foundation.

In 2015-16 season Svetlana opened the season with Orquesta Sinfonica Nacional Juvenil in Lima, Peru, and was chosen as the soloist on the New Year tour to China with Dublin Philharmonic/Maestro Derek Gleeson performing Rachmaninoff throughout in 7 cities including Suzhou Grand Theater, Harbin New Opera House and Concert Hall, Wuhan Qintai Concert Hall, Tianjin Grand Theater and in Changsha opening its new Concert Hall.

Highlights of 2016 include performances and recordings at the inauguration year of Tippet Rise Festival in Montana together with Christopher O’Riley, its founding director; duo recital with Vadim Repin at Cartagena Music Festival in newly renovated Teatro Colon, Bogota for “2017 Columbia-France Year”; recital debuts in Buenos Aires and Cordoba, Argentina; tour in China with Bulgarian Philharmonic Orchestra; and masterclasses and recitals at Philadelphia International Music Festival and at Saint Petersburg Quartet Summer Academy.

Svetlana holds a D.M.A. from the University of Michigan where she studied with Professor Arthur Greene; B.M., M.M., and Artist Diplomas from  Indiana University, Oberlin Conservatory, Brussels Royal Conservatory and Balakirev Music College where her professors were Alexander Toradze, Monique Duphil, Evgeny Mogilesvky and Natalia Fish.