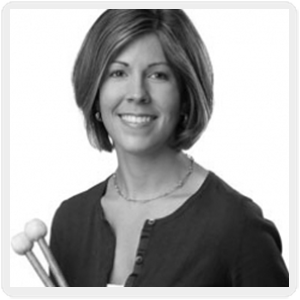 Angela Zator Nelson, associate principal timpani and section percussion, joined The Philadelphia Orchestra in 1999 as the first female percussionist ever hired by the Orchestra. A native of the Chicago area, Ms. Nelson graduated from Northwestern University’s School of Music where she studied with James Ross and Patricia Dash of the Chicago Symphony and with marimba virtuoso Michael Burritt. While in Chicago, Ms. Nelson was principal percussion of the Civic Orchestra for three years. In 2001, she obtained a masters degree in music performance from Temple University, where her principal instructor was Alan Abel of The Philadelphia Orchestra.

As an educator, Ms. Nelson joined the faculty at Temple University as adjunct professor in 2001. She has given master classes to numerous students in grade school through college and has presented classes at the Percussive Arts Society International Convention.

Ms. Nelson and her husband, percussionist David Nelson, enjoy working as a percussion duo performing recitals and educational concerts for both children and adults. They are also part of the Bob Beach Trio performing blues, folk, and rock in local coffeehouses and regularly at Philadelphia’s World Café Live. The trio most recently recorded a demo album entitled Baby Please Don’t Go. Ms. Nelson is a Zildjian Performing Artist and endorses their cymbals.