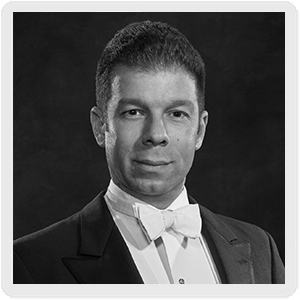 Maestro Louis Scaglione, who is respected nationally as a leader in classical music education, has spent the better part of 30 years developing his craft. As a musician, educator, conductor, and administrative executive, his career has afforded him extensive experience in orchestral, choral, and opera literature, as well as in education and executive administration. In the greater Delaware Valley region, he is an esteemed and well-respected colleague with outstanding relationships with many arts, educational, and cultural organizations and institutions.

Maestro Scaglione’s professional career began in 1993 when he moved to Philadelphia from Champaign, Illinois, where he attended the University of Illinois. He received his Bachelor of Science in Music Education there and had advanced studies in piano performance, vocal coaching, opera, and choral music. He completed his Master of Music in 1996 from Temple University. At Temple University, he was awarded fellowship and teaching assistantship to complete his graduate work. His graduate teaching assistantship was with the opera department and the theory department. As a teaching assistant, his primary assignment was to assist the Temple Opera Theater’s efforts to rebuild its program and serve as Assistant Conductor and Chorus Master.

Under Maestro Scaglione’s leadership, the PYO Music Institute has grown to five large ensemble/orchestral divisions including Philadelphia Youth Orchestra, Philadelphia Young Artists Orchestra, Young Musicians Debut Orchestra, Bravo Brass, Prysm Strings, and one community enrichment and engagement program entitled Tune Up Philly – Orchestral Pathways Program. He has devoted his career to music education and the instruction of music at the highest levels. During his time with Philadelphia Youth Orchestra, he has conducted many major works from the orchestra literature cannon, as well as choral-orchestral masterworks. He has collaborated with many soloists, both instrumental and vocal, as well as distinguished choral societies including the Mendelssohn Club Chorus (Philadelphia) and the Choral Society of

Concurrent with his tenure with the PYO Music Institute, Maestro Scaglione has held several other positions with regional performing arts organizations. In 2019, he was invited to join the Rowan University’s School of Music as Visiting Guest Artist. While in residence, he conducted the Rowan University Orchestra and Rowan University Opera Department in fully-staged performances of Gian Carlo Menotti’s Amahl and the Night Visitors, as well as works for orchestra by Wolfgang Amadeus Mozart. Since 2012, he has annually worked with Philadelphia International Music Festival, a summer music program in Bryn Mawr, Pennsylvania, as principal conductor and member of the faculty. He served as Executive Vice President, Chief Operating Officer, and then Chief Financial Officer of The Philly Pops from 2011 to 2019 and was a member of the executive team that took The Philly Pops from bankruptcy to prosperity. He also served as Artistic Director of the Choral Society of Montgomery County in residence at Montgomery County Community College (Pennsylvania) from 2002 to 2012. From 2006 through 2010, he was Resident Music Director and Conductor for the Luzerne Music Center (New York). He is a former member of the faculty and administrative staff of Temple University Music Preparatory Division. Because of his work with Philadelphia Youth Orchestra, Maestro Scaglione was elected by his peers in 2006 to serve as Chairman of the Youth Orchestra Division Board of the League of American Orchestras and he served on the League’s Board of Directors.

Additionally, Maestro Scaglione’s involvement with the greater Philadelphia cultural and social community has included service as a member of several non-profit boards. He currently serves on the Board of Directors of The Union League of Philadelphia. Philanthropy is paramount to Maestro Scaglione, and he teaches his students the importance of “giving-back” to one’s community through one’s talents.