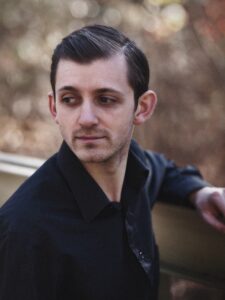 Sebastian Grand is Music Director of the Delaware County Symphony and active as a conductor, pianist and educator both throughout Europe and in the United States. Raised in Guernsey, UK, he is a First-class graduate of the Joint Course between the University of Manchester and the Royal Northern College of Music (RNCM) and has received a Masters with distinction from the Royal Academy of Music in London. He is Assistant Conductor of Bucks County Symphony Orchestra, Conductor of YOBC’s Philharmonia Ensemble, a faculty member at Lafayette College and also directs the Grand School of Music in New Hope, PA.

As founder and principal conductor of the Guernsey Sinfonietta, Mr. Grand is in high demand as conductor of a wide variety of both professional and non-professional ensembles. He was a participant on the Orkney Conductor’s Course, where he worked with the Royal Scottish National Orchestra, the Trondheim Soloists and the St Magnus Festival Chorus and received a full bursary to conduct the Orchestra of the Swan in a public master class with Kenneth Woods. He co-founded the Odyssey Symphony Orchestra, who performed their debut concert in St James’s Piccadilly in 2011, and worked with the Kew Sinfonia and Julian Jacobsen in a performance of Beethoven’s Emperor Concerto in 2014. He has taken additional rehearsals for Ealing Symphony Orchestra, the Orchestra of the City, Lord Williams Festival Chorus and St Alban’s Chamber Choir. Mr. Grand also conducted the University of Manchester String Orchestra’s 09/10 Season and for the Royal Academy of Music’s Opera Scenes.  In Pennsylvania, Mr. Grand has also worked as a conductor for Bucks County Music Educators’ Association (BCMEA) and as string tutor to GSM ensembles.

As a pianist, Mr. Grand has worked as a concerto soloist, recitalist, accompanist, chamber musician, orchestral pianist and répétiteur. He made his concerto debut in 2008, receiving a standing ovation for his performance of Gershwin’s Rhapsody in Blue and has since performed Mendelssohn’s Piano Concerto no. 1 (University of Manchester Sinfonietta), Bartok’s Concerto for Two Pianos and Percussion (University of Manchester Symphony Orchestra), Grieg’s Piano Concerto (St James Sinfonia), Saint-Saens Carnival of the Animals (Guernsey Camerata) and Mozart Concerto for 2 Pianos (GSO). He has performed at venues including Carnegie Hall, Bridgewater Hall and the Barbican Centre.

Mr. Grand’s notable awards include winning three Hargreaves Prizes and the Procter-Gregg Prize at Manchester University, the Piano Duo Prize and the Clifton Helliwell Memorial Prize at the RNCM, and the Dorothy Bryant Award at the Academy. He was also commended in the Christian Carpenter Piano Recital Prize and the Harold Craxton Piano Trio Prize whilst at the Academy and was a prizewinner at the Llangollen International Eisteddfod. His formative years were spent learning with Mervyn Grand, and were followed by studies with Ian Fountain, Paul Janes and Vanessa Latarche. Mr. Grand is an adjudicator for several piano competitions, including the Bart Pitman Memorial Scholarship and the Caprio Competition.