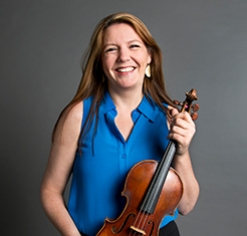 PIMFAdminMarch 29, 2019In The NewsComments are off for this post

PIMF Artistic Director and Co-Founder Kimberly Fisher has built a beautifully variegated career in music. In her earliest years, growing up in Edmonton, Alberta, she developed her violin playing under the tutelage of her father, Larry Fisher, while idolizing the special sound of The Philadelphia Orchestra on recordings at home. Growing up in a musical family and working hard from the start set a trajectory that brought her to study at the Curtis Institute, win a spot in The Philadelphia Orchestra, and ultimately attain the Peter A. Benoliel Chair as Principal Second Violinist. Throughout her life, Ms. Fisher has sown seeds of her pedagogical philosophy alongside her prestigious performance career, and even found time to grow a loving family of her own. In this article we will “meet the Artistic Director” as we explore her interests, accolades, philosophy, and pursuits.

Ms. Fisher first joined The Philadelphia Orchestra in 1992, but her responsibilities to the ensemble have not interfered with her ability to establish a rich performance career as a recitalist and chamber musician. Ms. Fisher has performed as a soloist with many orchestras around the world, including Canadian symphony orchestras in Vancouver and Victoria, while also frequently standing before her home team here in Philadelphia. Ms. Fisher currently plays on a 1782 Guadagnini violin given to her on loan from The Philadelphia Orchestra. She continues to teach students privately, and many of her students have gone on to prestigious music schools and found their ways into successful music careers.

A primary thread of her musical philosophy lies at the intersection of creativity and discipline. Ms. Fisher would articulate the formula to success in the development of a creative imagination bound by active pursuit of following through on ideas. Ms. Fisher encourages her students to “practice with purpose,” and although many of her students go on to have successful careers as musicians, she holds this philosophy integral to pan-disciplinary success. Ms. Fisher encourages her students to practice in front of a mirror, create performance opportunities for themselves (i.e. make arrangements at community venues or within familiar institutions,) and to practice playing through pieces without stopping to dwell on mistakes. She also encourages attendance at summer music camps, places which she notes provide huge potential for concentrated progress.

As fate would have it, Ms. Fisher found herself in the position to be at the helm of developing a summer music camp program. The earliest activity in the origination of the Philadelphia International Music Festival began as a makeshift supervised practice operation Ms. Fisher offered at her place of residence for students in her private studio. It just so happened that one of her students came from a family which had expertise and a track record in operating athletic summer camps, and thus the potential for the PIMF of today was born. Alongside President and Co-Founder Sandy Marcucci, the two have overseen the development of PIMF into a titanic presence on the international summer music education scene. In 2018, over 400 students gathered from around the world at Bryn Mawr College to pursue an intensive education in music in studying with members of The Philadelphia Orchestra. PIMF offers a multitude of programs which allow for the specialized development of musicians at all ages, skill levels, and of varied musical disciplines. More information about the programs at PIMF can be found here.

Ms. Fisher’s interests outside of music are focused on her family. She loves to travel with her family, and engages in a variety of pursuits, including making mosaic art with her husband and keeping tabs on the professional tennis circuit. Ms. Fisher is a connoisseur of fine food, and keeps a running list of world class restaurants and chefs that she would love to experience in her travels.

On a career in music, Ms. Fisher says, “When most people say I’m going to become a musician, it is a leap of faith. It’s who I am, it’s what I am supposed to do. When you choose to become a musician, rather than choose a career, it’s who you are. It’s who you become.” Ms. Fisher’s laudable career is the result of her leap of faith and adherence to her ideals of consistent, thoughtful practice. In 2017, she received the C. Hartman Kuhn Award from The Philadelphia Orchestra – an award which nods to the quality of being and professionalism of the recipient, and how this character reflects positively on the orchestral organization as a whole. As with most super-humans, Ms. Fisher appears to be able to “do it all,” as she maintains active relationships with students of the past as well as the families she has come into contact with through various seminars, master classes, and her teaching at PIMF every summer. Are you an aspiring violinist? Perhaps it’s time that you got to know Kimberly Fisher a little bit better… and there’s no better place to get your introduction than at the Philadelphia International Music Festival.