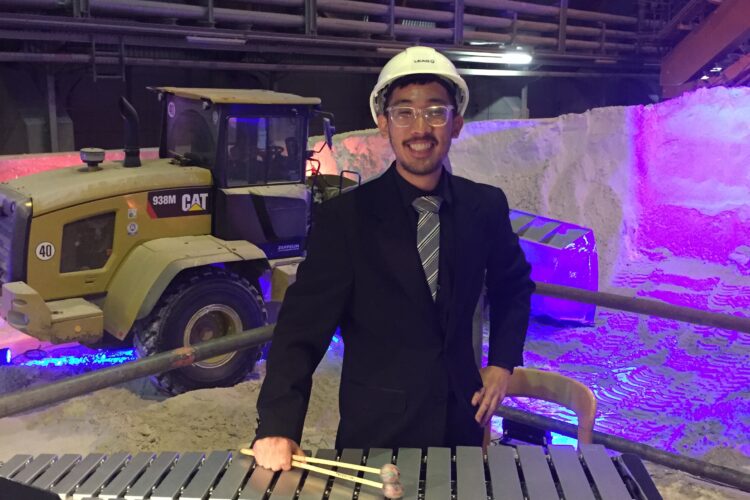 PIMFAdminOctober 14, 2020In The NewsComments are off for this post

It’s not unheard of for a percussion performance to take highest honors at a prestigious musical competition… it’s just not heard of very often.

But in a year of all kinds of “unprecedented” events, the Grand Prize in The Philadelphia International Music Festival’s 2020 Virtual Concerto Competition has been awarded to Bensen Kwan for a compelling performance on a member of the xylophone family: the marimba.

The marimba too rarely headlines in classical music as a solo instrument, if you ask Bensen. But the 25-year-old is working to bring the percussion section to center stage.

A regular in the concert hall for less than a century, the marimba attracted a flurry of attention from composers and audiences in the 1940s, but then was spotlighted less and less frequently.

Enter: Japanese percussionist Keiko Abe, who got hooked on the marimba some 40 years ago and promoted it around the world, sparking new appreciation for its soft sound and acrobatic performance requirements. Her efforts led to the instrument’s range expanding from four octaves to five.

“Keiko Abe, the composer, is one of my biggest heroes because she was the first person in the world to really popularize it,” Bensen told his local newspaper. “The marimba is an up-and-coming solo instrument that people are, I think, taking more seriously. There’s only one or two graduate programs where you major in just marimba performance. Otherwise you learn all percussion.”

Abe’s adapted violin and piano works for marimba, as well as composing works specifically for it, including “Prism Rhapsody” Bensen presented to the PIMF judges. See him here:

While a proficient pianist and percussionist, the marimba in particular has brought Bensen not just accolades and awards, but opportunities for travel and study. The resident of Sugar Land, Texas, spent part of last year in Leipzig, Germany at the Hochschule fur Musik und Theater Felix Mendelssohn Bartholdy, where his performance resume was enhanced by a memorable gig in a hardhat!

“I played with the Saxon Wind Philharmonic,” Bensen told us, “and the event was at a power plant. I honestly could not tell you what exactly I did there because everything was in… well… German! I barely got through the rehearsals! They set up several stages for us in the power plant, and we went around and played different pieces in different places for a lot of business-men and women.

“It was like a touring performance of the plant. The hats were a cute touch, and we all wore it in the performance, but it wasn’t because of any safety precautions hahaha. The final stage was FREEZING and ginormous. I couldn’t really hear anything or what anyone was saying, but overall, it was a fun experience, and I’ll definitely remember that performance forever.”

Another instrument getting increasing amounts of Bensen’s hours of daily practice time is the steelpan. (See him play it here.)

Like the marimba, which arrived in Central and Latin America centuries ago with enslaved Africans, the steelpan’s origins are also non-European. Bensen feels it’s a “lovely instrument” and appreciates its history.

“Their origins come from Trinidad and Tobago,” he explained. “When the slaves were brought to Trinidad, the European colonizers did not allow them to play any of their music and even went to the lengths of destroying their African instruments. However, when the oil boom began, the Trinidadian slaves were clever and physically cut oil barrels and hammered out these notes to create these beautiful instruments. Now they are somewhat common to play in universities as they have ‘steel bands’ where there are different voicings of steel drums just like in string orchestras – violins, violas, cello, bass. There are lead pans, double tenors, double seconds, et cetera.”