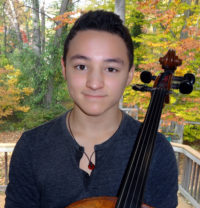 PIMFAdminApril 15, 2019In The NewsComments are off for this post

As winner of the 2018 Concerto Competition at the Philadelphia International Music Festival, cellist Julian Shively will be performing the Dvorak Cello Concerto alongside Conductor Benjamin Niemczyk and the New York Session Symphony on Saturday, May 11th, 2019. Details about the performance can be found here.  PIMF connected with Julian to explore some of the steps taken in his musical journey, going back to some of the first steps he took as a toddler!

The Shively household is a musical household; both parents hold graduate degrees in composition, and Julian’s younger sister is violinist and frequent chamber music partner. When, at age 2, Julian demonstrated an ability to retain pitches from his toy keyboard by memory, his parents knew they had a budding musician on their hands. Piano lessons were arranged shortly after, and by age 6 Julian was studying cello as well. Julian’s earliest studies were in the Suzuki Method, an experience which Julian notes, “…cultivated my ear and technical foundation in a fun and loving environment.” Growing up in Connecticut afforded Julian the opportunity to particiate in the Greater Bridgeport Youth Orchestras – an organization he participated in until heading off to McGill University in 2018.

Julian has always fostered a love for chamber music. He cannot recall a time when he was not active as a chamber musician, and alongside the fulfilling musical experience, he finds it to be an excellent vehicle for improved musicianship. Currently pursuing studies at the Schulich School of Music at McGill University, Julian is an active member of a string quartet as well as the McGill Symphony Orchestra. In his free time you might catch Julian out and about on the streets of Montreal – one of his favorite pastimes is jumping on his bicycle and exploring the city.

“Passion is the biggest driver of success – it is necessary for discipline in practice. Having teachers who ignite and inspire that passion is crucial.” Julian’s musical wisdom likely owes a nod to the great teachers he has been fortunate to interface with throughout his development. He counts his teachers, his musical colleagues, and experiences with live performances amongst his greatest influences. At PIMF, Julian was able to participate in private lessons and masterclasses with cellists John Koen and Hai-Ye Ni of The Philadelphia Orchestra. These opportunities were among the highlights of Julian’s PIMF experience alongside his experience in the concerto competition, participation in recreational activities, and the great people he met. (His words, not ours! : )

As Julian says, “Learning from different people and getting their differing perspectives on music allows me to be a more complete musician.” Music festivals, like PIMF, are great opportunities to experience new teachers and new ideas in a convenient and focused environment. You can check out the different programs for our upcoming 2019 festival here!

Julian has cultivated a broad palette of interests: he is an accomplished jazz pianist and is fascinated by the worlds of contemporary physics and philosophy alike. Although graduate studies are in the future, Julian is not certain that he will seek a professional career in music; in fact, his dream job is to be a part of NASA. Julian has a unique condition known as synesthesia. Synesthetes experience atypical combinations of sensory or cognitive pathways. For Julian, this translates to a relationship between sounds, numbers, or letters and an associated color. He notes that colors are dancing in his head all of the time, and it can be distracting, as it cannot be ‘turned off’. He feels lucky for this unique condition. Julian cites his parents as his primary role models – honest, hardworking parents who taught him to be grounded and continually seek self improvement.

Julian has been successful in developing his cello playing and seeking out opportunities to perform as a soloist. We hope Julian’s story inspires you to make the most of the musical opportunities you having during the school year and during the summer break. We wish Julian the best and look forward to his performance of the Dvorak Cello Concerto in New York City this Spring!