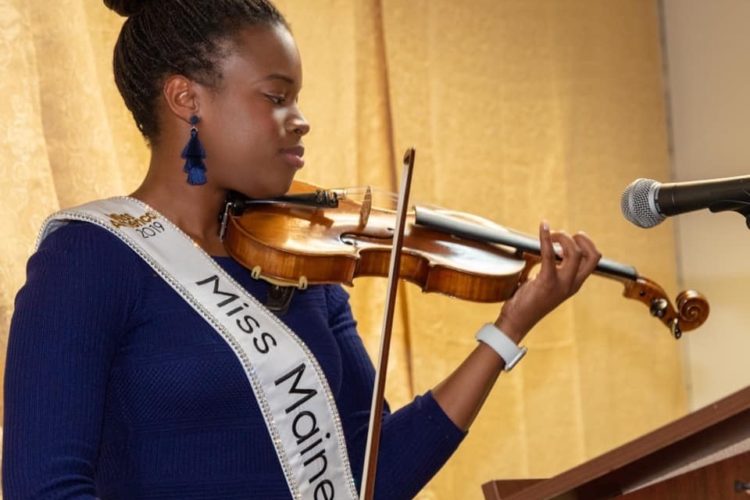 PIMFAdminDecember 11, 2019In The NewsComments are off for this post

“So many great things came of my experience at PIMF – I can’t be more grateful for being an alumna.”

Isn’t THAT music to our ears? But that’s the sincere message from alumna Carolyn Brady, who spent 5 summers studying at the Philadelphia International Music Festival, and who will represent the great state of Maine this month as its first-ever African-American candidate to the legendary Miss America competition.

We reminisced with her for a few precious minutes between her Miss Maine obligations and her preparations for the finals, to be broadcast nationally this year from the Mohegan Sun resort in Connecticut.

Carolyn’s fondness for her PIMF experience is clear, as well as her appreciation for its impact on her classical music training. She’ll be performing on the violin in the talent segment, weighed more heavily now at the updated Miss America 2.0.

Though it’s been seven years since she furthered her music education at the Bryn Mawr college-based summer music camp, we kind of love the fact that she still speaks of it in the present tense!

How she sees the PIMF family…

“I started at PIMF just after 6th grade and stayed with it until just about graduation. PIMF is amazing because they have the widest possible variety of students studying there. You have the people who are home-schooled, virtuosos at a very, very young age and you have people at a youth orchestra at their schools who just want to explore music on a more serious level but maybe not necessarily make it their only life path. I think that is really reflective of the options that they make available to all of us, and I really love that.

“I also met one of my best friends in the entire world at PIMF — we met in the cafeteria my first or second year, and continued to meet up every year. It was our time together because we didn’t go to school together.

“Amazing, amazing person and we were able to use PIMF as a bonding experience, so it really is the case that you meet the friends that you have for life in the program!”

“I remember vividly my very first day of camp. My parents signed me up without my knowledge for the Bach Double competition, saying this is a song you know, we know you know it, and they sent me in to the audition room with Madison Day and David Booth.

“And I burst out into frantic tears. I was so scared! At this point I had never auditioned for a piece before, I mean why would you — you do the Suzuki method, you play the solo concerts, that’s never really part of the gig. And I was so, so scared and they could not have been more welcoming.

“I probably would not have stayed as committed to my instrument if not for PIMF. It always marked a transition. Every year I would spend my two weeks at PIMF and at the end of those two weeks I’d start my preparations for the following year. So instead of being 8th chair, second violin, I wanted to be 2nd chair, second violin, and that was going to be what I worked toward over the course of that year.

“They will help you with whatever goal you choose to pursue, it’s only a matter of you identifying that goal and choosing to go for it. In my time there, I never walked in on the first day (of camp) and said, ‘My goal is to go to Julliard’ — though others have. I would walk in on the first day and say that ‘by the time I graduate college I want to be able to play THIS piece’ or ‘to be able to play a harmonic like THIS.’

“So, making sure those goals are relative to what you individually can handle as a musician, wherever you fall on that spectrum. And then, communicating that to the PIMF faculty, because they have the capacity to help you toward whatever goal you set on your musical journey, so you really want to make sure that you take advantage of that.

“And I think that in addition to having a consistent way to make sure that I was always going back to certain skills that I had acquired there my first year – and built on every year thereafter – is really what kept me motivated to continue to grow both as an instrumentalist and a person.”

No matter who takes the Miss America crown this month, Carolyn Brady will forever own the honor of having been on a very short list of candidates to the renowned yearly competition focused on scholarship, social impact, talent and empowerment.

PIMF will be on that resume too! We couldn’t be more delighted to have been part of her journey.