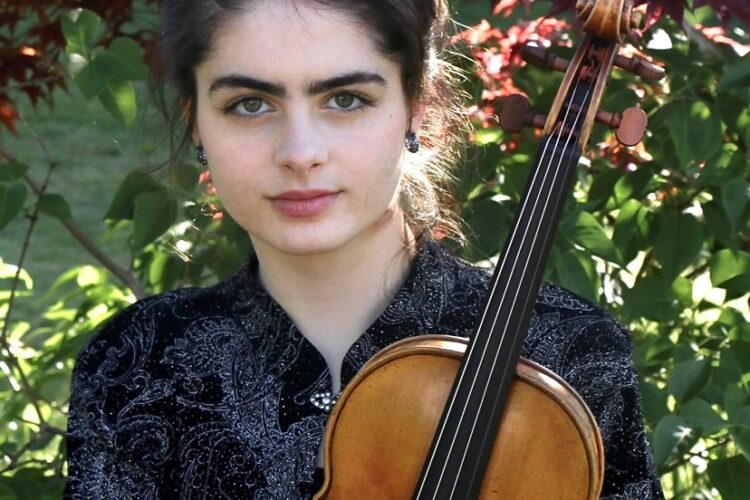 PIMFAdminMarch 27, 2021In The NewsComments are off for this post

As a precocious pre-schooler on Whidbey Island, Washington, three-year-old Marley Erickson was handed a tiny violin purchased over the internet, and never looked back.

The winner of PIMF’s June 2020 Virtual Concerto Competition immediately began her violin studies in the Suzuki Method. She joined the Coleman Violin Studio in Seattle at age 8.

“I studied first with the brilliant pedagogue and violin technician, Jan Coleman,“ Marley recalls. “After she taught me form and technique, I started studying with Simon James, former assistant concertmaster of the Seattle Symphony and professor at San Francisco Conservatory, and with the great musician, collaborative pianist and genius musical mind, Hiro David.

“Now I’m in my first year of the BA program at the Liszt Academy in Budapest. I’m studying with the famous Hungarian pedagogue Eszter Perényi and Barnabás Kelemen, an incredible concert violinist and pioneer in the music world.”

It just doesn’t seem possible that Marley has been alive long enough to rack up the honors and prestigious performances she’s experienced with a violin tucked under her chin. She was competing by age 10 in small regional competitions, moving into the international competitive arena when she was 12.

That was also the age at which she began her already illustrious concert career.

“There are definitely a few concerts that will always make me happy to think back on,” Marley told us. “One of the first was when I was 12 and performed and extremely difficult piece – Ernst’s “Last Rose of Summer” – and afterwards my teacher told me it was ‘devastating’ in a good way and how proud he was. Later that year was when I first solo’d with the Seattle Symphony… that whole day was so exhilarating and now makes me very nostalgic for the times I was able to play with orchestra to a live audience!

“One of the best experiences I’ve ever had was to play at Walt Disney Concert Hall.  I was playing a contemporary solo violin piece by an amazing Spanish composer i Bosch, who actually flew to L.A. to work on the piece with me and hear the concert! And I got to talk with John Adams, whose concert series it was!

“The experience of playing in the hall and actually wandering through the aisles – it was a theatrical piece which required walking! – was the most out-of-this-world feeling, and completely transcending psychologically. The atmosphere was so open and inspired and it was incredible to be able to transfix such a huge audience and myself. I think I almost cried during the applause as my eyes adjusted to the blaring lights coming at the stage and seeing literally thousands of people standing!”

Marley was actually invited by Adams himself to perform that North American Premiere of Oscar Colomina i Bosch’s “Shpigl” on the Los Angeles Philharmonic’s Green Umbrella Series at Walt Disney Concert Hall. The San Francisco Classical Voice, Oct. 4, 2016 edition raved, “…Shpigl will be remembered for the remarkable 13-year-old ‘old soul’ performer, Marley Erickson, who made it come alive…Watch out world, here she comes.”

Homeschooled, Marley was able to finish high school by age 16 and move to Europe to further her violin studies.

PIMF’s concerto competition last year was the first virtual competition Marley had ever entered, and her violin study in Hungary informed her choice of material.

“I submitted a recording of Ravel’s ‘Tzigane’ for the competition,” she explains.  “It was a live recording of the first serious time I performed it. I think I had just moved to Hungary or was going to very soon, and the piece itself is based off Hungarian Roma gypsy music, the title itself meaning ‘gypsy.’ I was further inspired to play it because my new teacher Barnabás Kelemen has traditional Roma roots. His grandfather was a famous gypsy violinist, and actually could have been one of the musicians to inspire Ravel to write this piece. “

“It was really motivating and inspiring to be able to play in (those) Master Classes… It was also a really nice experience meeting the other winners and great young musicians. I was in Budapest for both and because of the time difference it was at around 2 am when the they happened! It was quite exciting to stay awake and be playing at that hour!”

Marley’s dream gig would be soloist with the Berlin Philharmonic, but she also has plans where different areas of arts and culture can intersect.

“I am increasingly fond of the idea of creating spaces that are completely immersive in the world of art and music,” she muses. “My real goal is to create a concert series which combines all elements of art which can enhance the musical experience. I think music is really not so far removed from visual art and poetry etc. and they almost always inspire and influence each other. So, I would really like to create ‘concerts’ where a full sensory and physical experience can be enjoyed.”

Where might your dreams and drive take YOU? The deadline for submissions to PIMF’s Semi-Annual Online Concerto Competition is March 31st. All instruments, four age divisions. We look forward to your audition here.

Related Articles
Messiah!
PIMFVirtual: Music Ed and Performance Prep Wherever You Need To Be
A Musical Milestone for PIMF’s Piano Partner