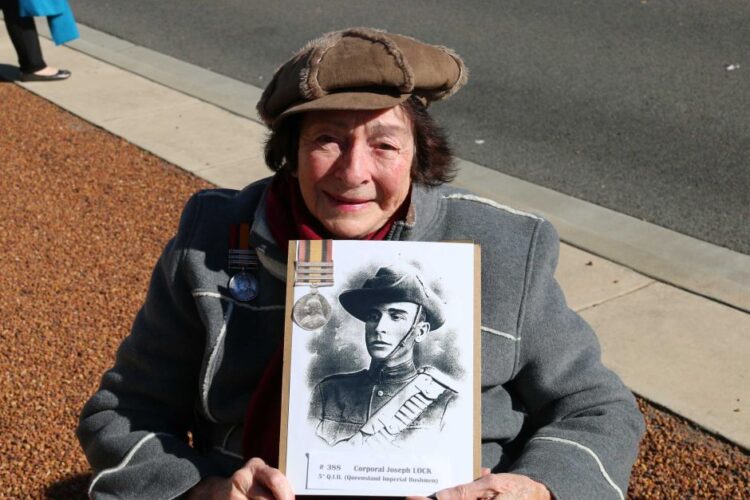 PIMFAdminNovember 03, 2020In The NewsComments are off for this post

A 100th birthday milestone always inspires awe: wrap your head around the earth-shaking events and changes, the sweep of history witnessed over such a lifetime! Centenarians are extraordinary living connections to the past.

You can learn a thing or two – or three, or three hundred – from the life Valma Lock Hunter, of whom our Alice Downs Scholarship for Young Violinists is in honor, was established in 2010 when she was a girlish 90. She turns 100 on November 4, 2020.

What’s in a name? Though the scholarship helps to send a deserving young musician from Camden County, New Jersey, to the Philadelphia International Music Festival every year, it’s named for a place on the other side of the world: “Alice Downs” is not a person, but the sheep and cattle station in Queensland, Australia where Valma grew up.

By choosing to honor Valma’s first home in the name, this annual gift connects a South Jersey student not only to centuries of musical art, craft and skill, but to the legacy of a proud Aussie artist and more than a century of her own fascinating family history.

“As a young musician, Mrs. Hunter’s love of the arts inspires me,” says 2019 recipient violist Alena Bicong Zhang of Cherry Hill. “She is an energetic and kind person, and I am incredibly grateful to her for allowing me the chance to further my experiences with music.”

Valma’s love for music and dance were instilled early.

How far do you travel for music lessons? In the years between the World Wars, her mother made sure Valma and her brother received a proper music education, which required taking them regularly from the outback of echoing plains and vast skies to the big city of Brisbane almost 500 miles away. A hundred years later, it’s still over 9 hours by car.

Valma studied piano and violin but her skill in ballet earned her a spotlight onstage at His Majesty’s Theatre in Brisbane at age 9. As a teenager she was teaching students herself, some of whom went on to high-profile ballet careers. Valma would have continued her dance training in London but for the outbreak of World War II. She married and, as her own mother had, raised her children with an appreciation for the arts and for their globe-spanning family history.

Just three years ago, Valma and her daughter took part in the dedication of a statue at the new National Boer War Memorial in Australia’s capital city of Canberra, commemorating the country’s involvement in the conflict from 1899 to 1902. The four larger-than-life bronze Australian light horsemen depicted traversing the South African veld is modeled on Valma’s father, Corporal Joseph Lock of the 5th Queensland Imperial Bushmen, and his comrades.

As one of few living first-generation Boer War descendants, Valma was widely quoted in the press coverage, sharing memories of her father, who she described as “a wonderful, patient man” as well as a superb horseman who shared his love of country and country life with his family.

Valma’s son, David Hunter of Haddonfield, New Jersey, established The Alice Downs Scholarship as a 90th birthday gift to his mum and included that nod to his forbears in the name.

With school systems trimming arts education for years in favor of more science and math programming, music students have often sought higher level enrichment off-campus, an added expense for many families even during the school year.

Scholarships such as the Alice Downs gift that covers tuition to PIMF’s intensive summer camp program are more important than ever for motivated musicians looking to sharpen their skills when school is out.

“I had never been to a music camp prior to attending PIMF, and I found it very inspiring,” Alena Bicong Zhang explains. “Winning the scholarship allowed me the experience to play with a full orchestra and also make lifelong friends along the way. I played difficult repertoire that strengthened my musical abilities, received feedback and could apply lessons from masterclasses to my own playing, which I had never experienced before. After attending PIMF, I increased my daily practicing and I also focused more on the details in my music.”

Eight students have been able to attend the summer programs of The Philadelphia International Music Festival because of the generous support of Valma Lock Hunter’s family. Joshua Baw of Voorhees is a two-time winner of the scholarship (2014 and 2015), and created a musical message to honor Valma’s milestone you can hear here.

Applicants for the scholarship submit a written essay with their auditions.  Alena described in her essay how the viola is often the “heartbeat” of a piece:

“…playing a steady rhythm to keep the entire orchestra in time. Other times, the viola plays intricate rhythms… The warm tone of a viola expands the emotion of the orchestra and the deep notes carry out either joyful, wistful, or furious emotions that add color and depth. I’m so happy that I made the decision to become a violist and hope that my playing will inspire others to appreciate the importance of the viola’s role.”

All of us at PIMF appreciate the importance of gracious patroness of the arts, Valma Lock Hunter, and all the gifts she has shared. We wish her the warmest congratulations on her remarkable century.