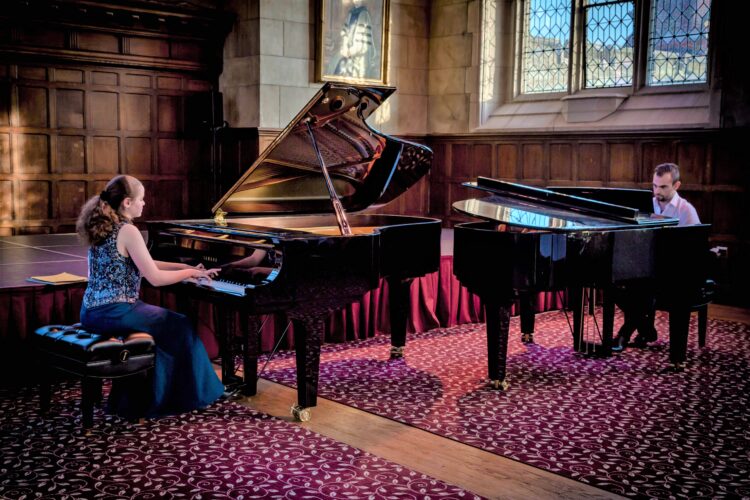 PIMFAdminJune 02, 2021In The NewsComments are off for this post

When it comes to creating a piano, it’s all about time. Every step from conception to concert-hall ovation-worthy completion takes time.

Then there’s a piano’s unique connection to musical time, its history. The past. The present. The future.

Painstakingly crafting an authentic instrument to faithfully perform centuries-old compositions, while adapting to present-day materials and supply-chains and applying innovative new technologies in design and construction, on a product that must serve the investment of effort and dedication by the user for years to come.

That’s a very general description of the calling that Cunningham Piano Company has elevated to its own art form for 130 years. Yes,130! The piano-forte itself was still a fairly new instrument when Cunningham went into business, and the company’s longevity is historic in itself.

“Cunningham Piano Company has been around since 1891,” co-owner Richard Galassini told a Philadelphia TV station. “For the first 50 years that we existed, we made pianos by hand right here in Philadelphia. And today we are experts on some of the finest pianos that might be 100 years old and even the new products that are out today. And also the technology and the technology-based instruments where a lot of the children are going to start today.”

From the grandest grand piano in a fine turn-of-the-19th-century parlor, to a 21st century hybrid Cunningham Composer piano with a touchscreen monitor and internal MIDI recording strip and computer, Cunningham has kept ahead of the trends during its long history while setting a few of its own.

Cunningham was one of many piano companies in Philadelphia that launched during a Victorian era when industrialization and an increasingly affluent citizenry fueled demand for a personal entertainment system in pre-TV and -radio homes. It moved out of the urban center to the Germantown neighborhood in the 1930s and after World War II, began restoring old pianos as well, becoming a remanufacturer.

Sustainability before its time!

Today Cunningham is an expert in all makes, models and designs, not just its own, selling new and pre-owned, refreshed and refurbished, online all over the world as well as locally. It serves the needs of piano lovers in the Delaware Valley and beyond from its flagship store in King of Prussia, Pennsylvania and its New Jersey showroom in Cherry Hill, and from a brand-new showroom in Delmar, Delaware.

Visit any Cunningham location or just browse its website to see some spectacular examples of historic keyboard instruments restored to exacting modern standards. And we do mean historic.

It recently brought a Philadelphia Centennial Steinway concert grand piano back to its original splendor. The 9-foot-long instrument won a piano manufacturing competition at the Centennial International Exhibition of 1876 — the first official World’s Fair in the U.S. (in Philadelphia!) which coincided with the 100th anniversary of the signing of the Declaration of Independence.

Cunningham Piano has found itself intertwined with notable musical and even literary figures over its century-plus:

As Sergei Rachmaninov said, “Music is enough for a lifetime, but a lifetime is not enough for music.” Cunningham Piano’s support of generations of musicians is proof.

For everything the Cunningham Piano Company has done for us in the past, everything it still does for The Philadelphia International Music Festival and will continue to do, we are thankful and look forward to another 130 years of making music and history!