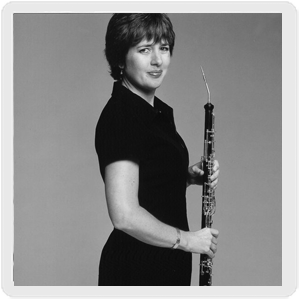 Ms. Masoudnia, fomerly with Minnesota Orchestra, has participated in the Marlboro Music Festival and performed with the Concerto Soloists of Philadelphia (now the Chamber Orchestra of Philadelphia) and the New York Symphonic Ensemble on four tours of Japan and Southeast Asia.

She is a featured artist on a CD of Beethoven and Triebensee oboe trios, released on the ASV Quicksilver label. A native of Philadelphia, Ms. Masoudnia graduated from the Curtis Institute of Music, where she studied with John de Lancie.