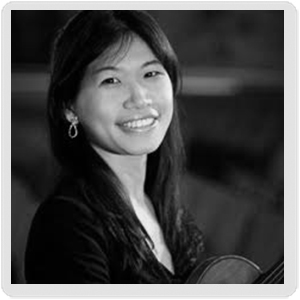 Violinist Mei Ching Huang is an experienced orchestral musician with a concurrent schedule of soloist and chamber music performances. She has played in such distinguished ensembles as the New York Philharmonic, the Grant Park Orchestra, the Pacific Music Festival Orchestra in Japan, and the Verbier Festival Orchestra in Switzerland. Conductors under whose direction she has played include Lorin Maazel, James Levine, Michael Tilson Thomas, Charles Dutoit, Christoph von Dohnányi, Gerard Schwarz, and James DePreist.

A former student of Keng-Yuen Tseng at the Peabody Conservatory of Johns Hopkins University, Ms. Huang has won numerous awards and honors, including first prize in the Marbury Violin Competition, second prize in the National Symphony Orchestra Young Soloists Competition, a top prize in the Yale Gordon Concerto Competition and the Hellam Young Artists’ Competition, and a finalist finish in the Michael Hill International Violin Competition in New Zealand. She is also the recipient of scholarships from such diverse organizations as the Leni Fe Bland Foundation, Peabody Career Development Grants, and the Taiwan Culture and Arts Foundation.

Ms. Huang holds a graduate diploma and a master’s degree from the Juilliard School, where her principal teachers were Robert Mann (violin) and Seymour Lipkin (chamber music). She is a recipient of a Dorothy Richard Starling Foundation scholarship, through which she is continuing graduate studies with Midori Goto at USC’s Thornton School of Music. Additionally, she has studied with David and Linda Cerone and Soovin Kim at Encore School for Strings.

In June 2006 Ms. Huang joined the New York Philharmonic as a section violinist under Lorin Maazel. The same year, Mr. Maazel invited her to be associate concertmaster at the Palau de les Arts Reina Sofia in Spain. In addition to a vigorous orchestra schedule, she frequently performs chamber music with colleagues from the New York Philharmonic in Avery Fisher Hall, Carnegie Hall, and Merkin Hall in New York City. Her experience in giving master classes is growing, the first one of which was in February 2008 in China during the New York Philharmonic’s tour of Asia.