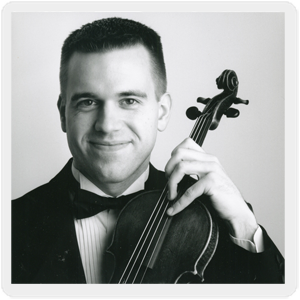 Born and raised in Hartford, Connecticut, Marc made his solo debut with the Atlanta Symphony in 2005. He holds both a Bachelors and a Masters of music from The Juilliard School and an advanced certificate from New York University (NYU), where his teachers were Ronald Copes and Pamela Frank, respectively.

Mr. Rovetti became Assistant Concertmaster of The Philadelphia Orchestra in September 2009, having been a member of the First Violin Section since 2007.

Prior to his positions in Philadelphia he was a member of the New World Symphony and the International Contemporary Ensemble (ICE). He was also a member of the award-winning Rothko String Quartet and the Mark Morris Dance Group Ensemble.

Mr. Rovetti has spent four summers at the Tanglewood Music Center, both as a fellow and as a violinist in the New Fromm Players, Tanglewood’s resident new music chamber ensemble. A strong advocate for new music, he has worked closely with composers Augusta Read Thomas, Bernard Rands, and Magnus Lindberg.