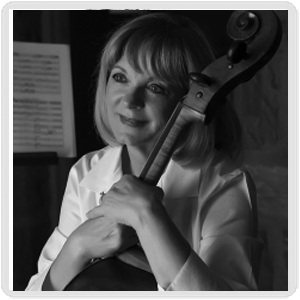 Gloria dePasquale joined The Philadelphia Orchestra’s cello section in 1977 at the invitation of Eugene Ormandy. Prior to that she served as associate principal cello of the Buffalo Philharmonic under Michael Tilson Thomas and was also a substitute player for the Boston Symphony and the Boston Pops Orchestra.

Born in Evansville, Indiana, Mrs. dePasquale credits the public school music program of her home town for her introduction to the cello. She graduated with honors with both her Bachelor of Music and Master of Music degrees from the New England Conservatory of Music in Boston where she was a student of Stephen Geber.

Mrs. dePasquale was cellist of the dePasquale String Quartet for more than two decades. The Quartet was in residence at Villanova University and presented a highly-acclaimed chamber music series, performing with such artists as Yo-Yo Ma, Emanuel Ax, Christoph Eschenbach, Yefim Bronfman, Wolfgang Sawallisch, and André Watts. Mrs. dePasquale was also cellist in the dePasquale Trio, performing alongside her late husband, William, and her daughter, Francesca.

Mrs. dePasquale is an advocate for music education both at The Philadelphia Orchestra, where she chairs the musician Education Committee, and in the Philadelphia Youth Orchestra, where she is artistic advisor to the organization and artistic advisor and conductor of the PRYSM and PRYSM Young Artist orchestras, founded six years ago with her late husband.

Mrs. dePasquale maintains a large private studio and runs monthly master classes and performance classes for her students. Her graduating students regularly are accepted into the nation’s finest conservatories, colleges, and universities. She also teaches for the New York State School of Orchestral Studies in Saratoga Springs, New York, every August and also is on the faculty of the Luzerne (NY) Music Center and the Philadelphia International Music Festival.