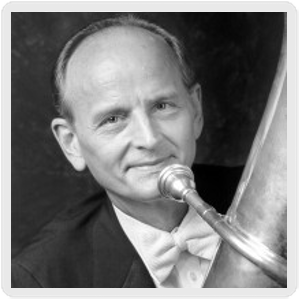 Paul Krzywicki was a member of the Philadelphia Orchestra from 1972 until his retirement in 2005. A native of Philadelphia, he attended St. Joseph’s Preparatory School and began studies with Leo Romano, continuing later with his Philadelphia Orchestra predecessor, Abe Torchinsky. He went on to receive Bachelor and Master of Music degrees and a performer’s certificate from Indiana University, where he studied with William J. Bell and became his teaching assistant.

Mr. Krzywicki received a Fromm Foundation fellowship to Tanglewood in 1965 and the same year performed Fantasy for Tuba and Strings by his brother, Jan, with the Philadelphia Orchestra. He performed the premiere of Concerto for Tuba and Orchestra by his brother and Concerto for Three Trombones and Tuba by Ray Premru, which was commissioned by the Philadelphia Orchestra in 1985.

Mr. Krzywicki was a member of the U.S. Military Academy Band at West Point; Portland Symphony; New York Brass Sextet; and Boston Ballet, Buffalo Philharmonic, and Aspen Music Festival orchestras. In addition to his performance career, Mr. Krzywicki has been on the faculty of the Curtis Institute of Music since 1972.